According to International Road and Accident Database, IRTAD member countries’ road fatalities are between 3 and 13 in 2012 via 2014 report. This rate is higher in Turkey. Due to this reason, Countries try to create new regulations to decrease these rates. The European Union Parliament introduces the legislation EU-2015/758 which means the obligation of eCall equipped vehicles in the European countries. It includes the new PSAPs (Public Safety Answering Points) structures will be ready for the new system in 2017 and the eCall equipped vehicles will be ready in 2018. This update and modification will be applied in Turkey after 2018. Ecall equipped vehicles in the international area such as U.S., Europe are used in the few volumes. The few volume vehicles are produced with respect to research and product developments, be accessories in the luxury cars. GM Onstar, BMW assist can be given as an example of the product. After eCall equipped vehicles in the countries, the eCall system will be an obligation in the vehicle systems. In vehicle eCall system which will be applied as an obligation after the related regulations will be activated manually or automatically when the accident occurs. When automatic eCall device is processed without any external input which means it can be activated automatically, manual eCall device is processed with external input such as driver or passenger touch force on the eCall measurement unit button. After activation process, the data sets are processed in eCall system in the vehicle and it is transferred to the cellular tower network. By the way, eCall device in the vehicle receives the vehicle signals of airbag, ignition signal, wake signals etc. When the cellular tower network chooses which cellular tower is the best alternative to take the required accident data via its storage capacity, signal power status; the chosen cellular tower takes the required accident data. It processes the data, transmits it to the related data format, stores them and sends to the related PSAP via a communication network. PSAPs in the new system will be varied as 112 PSAPs, manual eCall PSAPs and Automatic eCall PSAPs. Manual eCall PSAPs are giving the responses to the accidents of the vehicles including manual eCall device. On the other hand, Automatic eCall PSAPs are giving the responses to the accidents of the vehicles including auto eCall device. Next, PSAP takes the accident info, process it and forward to the related rescue services and these services define the accidents to the rescue service vehicles. After the new system updates in the vehicle system and the modifications of the country architectures of European Emergency Number Association (EENA), traffic and road management system and its infrastructures will be updated or created. The vehicle application of eCall system will be adapted to the vehicles with this new structure. In-vehicle eCall application is implemented with its operational requirements. On the other hand, the country architectures will be varied via having different PSAP and rescue service usages. The eCall PSAPs, 112 PSAP and Rescue Service units can be integrated as integrated units or they can be set up as different units. 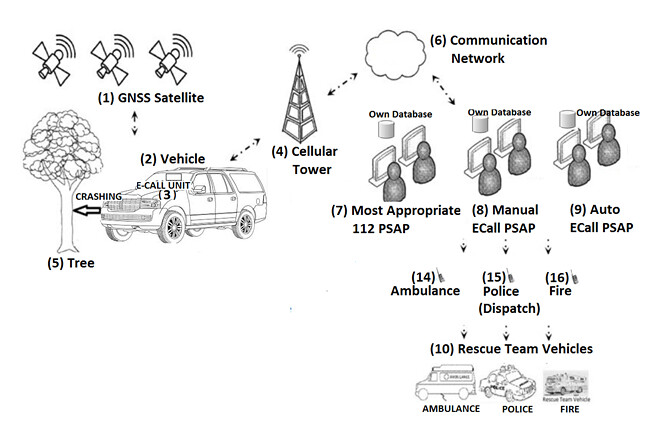